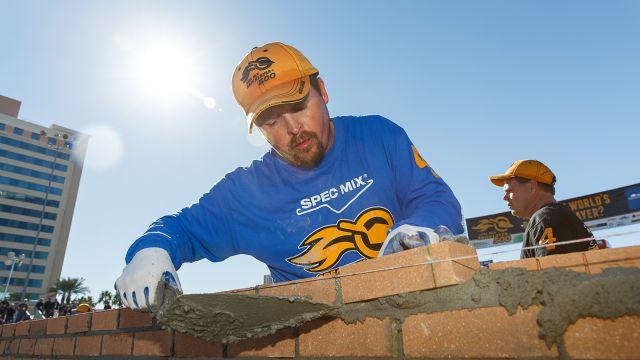 The official schedule for the 2016 SPEC MIX BRICKLAYER 500® Regional Qualifier Events has been released. It’s that time of year again when masons across North America put their skill, speed and stamina to the test at their local regional competition with the hope of earning spot at the World Championship in Las Vegas. But before they can advance to the World Championship round on January 18th, 2016 in Las Vegas, and compete for the title: “World’s Best Bricklayer,” they have to take 1st place at one of the 22 regional events listed below.

The 22 Regional Winners will compete against the returning 2016 World Champion, Scott Tuttle of Utah and SPEC MIX TOP CRAFTSMAN®, Darian Douthit of Oklahoma, who each laid 775 and 687 bricks, respectively. The Regional competitions start in mid-June this year, and run through the end of October which gives all 24 finalists plenty of time to train for the big showdown in Las Vegas to earn the title “World’s Best Bricklayer,” a 2017 Ford F-250 XLT 4×4 truck and nearly $15,000 in cash and prizes.