Natalie Kostelni, of the Philadelphia Business Journal published an update on the construction progress of the W/Element:

As with many construction projects, an untrained eye can sometimes overlook the complexity of the work that might be underway or already accomplished and such is the case with the W/Element hotel that is being developed at 15th and Chestnut streets in Philadelphia. 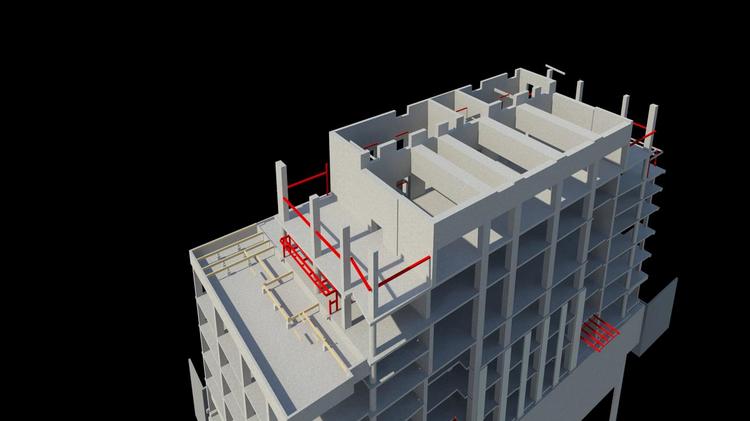 The installation of the beams mark a milestone for the construction project.

“It’s taken a long time to get where we are,” said Jim Behler of O’Donnell & Naccarato, the engineering firm involved in the project. As with any project, there have been a couple of challenges along the way, he said.

For one thing, the size of the site is small and in the heart of the city and that can complicate logistics. While different design options were evaluated multiple times, the one that was ultimately selected involved digging four stories below grade for the foundation and putting in underground parking. It was a long slog back up.

“It was a nice day when we finally reached the top,” Behler said. “It was very complex especially being right up against the old Girard Trust building. That added to the complexity.”

Contractors needed to make sure that the construction of the W/Element didn’t interfere or compromise the former Girard Trust building, which is the Ritz-Carlton, and that had to be taken into account. Then, along the way, there were some surprises found when excavating, such as old walls, foundations and other structures that belonged to buildings that once stood on the site. That part of the project took much longer than expected and threw the schedule off a bit. However, those involved hope to make up for those delays at a later date when more progress has been made and other parts of the project can potentially be accelerated.

While there were some unexpected hurdles early on, the installation of those giant beams went smoothly and were done before crane operators went on strike. The beams were an integral part of the design of the tower.

“The primary benefit of the giant beams is so that it creates the largest column free ballroom in the city,” said Cheryl A. Smith, an architect with CopeLinder who worked on its design. “This great room will not only be column free but have 20-foot high ceilings. It’s a whole complete structural design.”

The ballroom is located on level five and though the transfer beams were installed just below level nine, they affect what’s below them. Levels six and seven are also column free, but by locating the transfer beams within the double height space on the mechanical floor, the building doesn’t lose any floor area on the any of the floor levels below the transfer, Smith explained.

At 5,500 square feet and on level five, the ballroom will accommodate between 350 to 500 people. There will be 2,600 square feet of pre-function space and an 1,800-square-foot support kitchen. In addition, there is about 40,000 square feet of meeting rooms and breakout areas on levels three, four and five. Part of the design has a cantilevered monumental staircase connects levels four and five. “That provides a wow factor for the W Hotel,” Smith said.

There is a second benefit to installing the transfer beams. It created a dedicated space that is being used as a mechanical floor, Smith said. “We are taking advantage of the floor and space created between these transfers and that gives us the height we need,” she said.

The $280 million project is scheduled to be completed by next summer. The hotel will total 780,000 square feet.