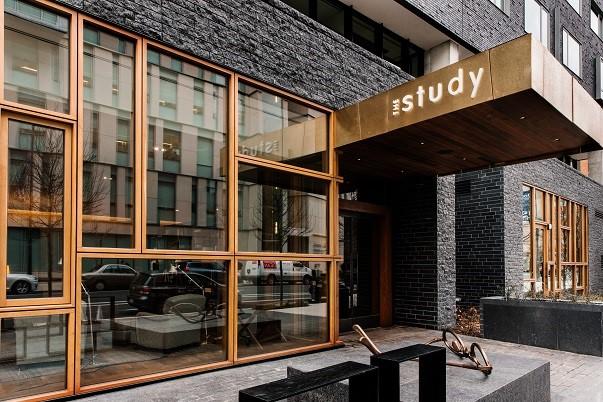 Congratulations to P. Agnes, Inc., the general contractor was awarded Gold Prize Winner in Commercial Architecture for The Study project at the 2018 Brick in Architecture Awards. The Study was the only project from Pennsylvania honored at this year’s awards.

The 2018 Brick in Architecture Awards, given out by the Brick Industry Association, honors “the country’s most visionary projects incorporating fired-clay brick” in commercial, educational, landscaping, and residential categories.

See the full list of Brick in Architecture Award winners:

About The Study Project

The Study at University City is a ten-story hotel featuring 212 guest rooms that also contains a 105-seat restaurant/bar with outdoor seating, two kitchens, a 7,000 square-foot event space with six venue options, an exercise room, and an environmentally-friendly green roof. Located at the corner of 33rd and Chestnut Streets in the heart of the University City neighborhood of Philadelphia, the 145,000 square-foot facility is designed as an urban retreat where visitors, professors, college students, their families, and local residents experience intimate gathering spaces that simultaneously encourages social interaction.

Congratulations to everyone involved in the project!