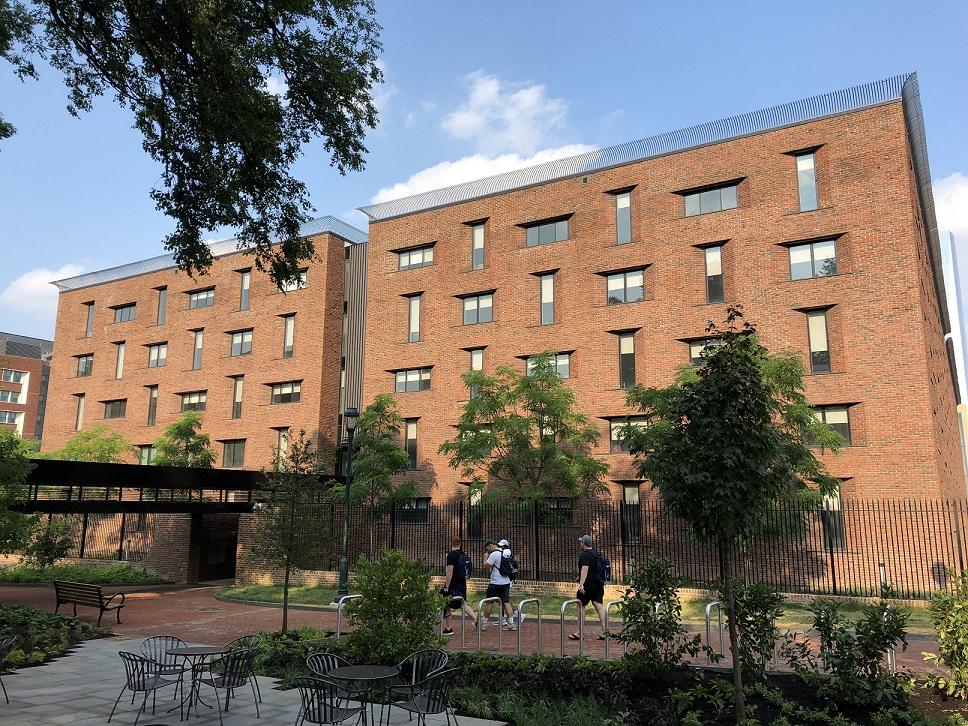 On August 16, 2018, the Preservation Alliance for Greater Philadelphia held a tour of the University of Pennsylvania’s Hill College House. This was a rare opportunity for non-UPenn community members to see the inside of one of the school’s dormitories. Originally designed by famed architect Eero Saarinen as a women’s dormitory and opened in 1960, the building was recently renovated by INTECH Construction.

Since it opened in 1960, Hill College House has been praised for Finnish-American architect Eero Saarinen’s revolutionary design vision for communal living, specially designed furniture and lighting, and thoughtful use of color and pattern. David Hollenberg, professor and former University Architect, and Michael Mills, partner at Mills + Schnoering Architects, explained the challenges in striking a balance between maintaining Saarinen’s original ideas and the need to bring the building up to code and up to date in terms of design and use.

The tour emphasized the drive to maintain and restore Saarinen’s intended design, such as cleaning up the brickwork on the exterior, keeping the original windows, bringing back a fountain to the dining area, and honoring small details such as which common room window shutters could be opened to the Atrium space.

The tour also noted changes that were made to bring the building up to date, such as installing a second elevator and a wheelchair ramp to make the building fully accessible, installing a new central cooling system, and creating more efficient energy capture and redistribution systems, which helped the building be awarded LEED Gold status.

Finally, the tour mentioned how this renovation looked at the future of the University of Pennsylvania’s designs. Communal spaces were moved out of the basement and onto floors with more light, creating more usable social spaces. Two decks were redesigned to create usable outdoor spaces for students. Hill College House is also the first residential building on campus to feature only gender neutral restrooms and bathrooms.

Thanks to the Preservation Alliance for Greater Philadelphia for organizing this tour!